Episode #327 — It’s the songs you remember – some of the most powerful anthems in CCM history. But every story has a beginning – special people who lay a foundation for the work to come. For beloved recording artist Mac Powell, there were people in his life that saw the gift he’d been given early, and helped him take the first steps to an extraordinary ministry.

“My parents were a big influence on me. They both sang and played guitar, so I always had that around the house. It took me a while to realize most parents aren’t like that! Most parents aren’t singing around a campfire all the time with their kids. So I was very, very fortunate. That was probably the most major musical effect on me. And being able to sing at church. I went to a real small church in Alabama and had chances to sing solos as an 8, 9, and 10 year old kid. That built up not only my desire to do that more, but gave me the confidence I could do that.”

And then there were the teachers that taught Mac so much more than notes on a page.

“Then through high school I had teachers that really encouraged me musically, and told me I had a gift. They encouraged me to grow that and develop it. There were times where it wasn’t even necessarily singing. I was in marching band in high school! I loved it. And so I had a couple guys that really poured into my life and helped me learn music.”

“I had an amazing voice teacher in college that just had the strongest voice, an amazing man. And he knew I wasn’t going to be singing opera music or these arias. He would give me things like jazz pieces. They weren’t rock songs, but something more of what my voice fit. A lot of people through the years – whether it was helping me musically or just business-wise and knowing how to move forward with the band. And, of course, the guys in the band itself – I wouldn’t be anywhere if it weren’t for them. I wouldn’t have probably had the drive or the courage to move forward without them. So I’m very thankful to tons of people. They say it takes a village, and it took a major village to help and encourage me all these years.” 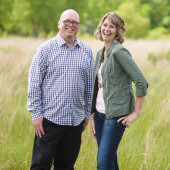